Post-concussion syndrome describes the Attention Deficits, concentration difficulties, Learning Difficulties, impulsivity, mood and anger problems, sometimes headaches and fatigue that may persist for years, after a minor closed head injury. More often than not, sufferers are treated for the symptoms with little if any resolution. Often the patient gets diagnosed with ADHD, Adjustment Disorder, Depression of other psychiatric disorder and has ongoing symptoms that are treatment resistant.

When the head receives a sharp blow, the difference in the movement between the brain and the skull produces forces that result in traumatic brain injuries (TBIs). Although maximum injury is suffered at the point of impact, the frontal and temporal regions have been shown to be consistently vulnerable to contusions regardless of the direction or the point of impact due to percussion and shearing forces on delicate brain tissue [1]. A "contre-coup" due to a percussion wave travelling through the brain matter and impacting the skull diagonally opposite can cause further contusion, and shear forces at the boundary between white and grey matter can result in axonal shearing [1].

The term Post-concussion syndrome or post-concussional disorder has been used to describe the range of residual symptoms that persist 12 months and beyond, sometimes years after the injury. Although minor head injuries are generally considered benign, a significant number of people report persistent symptoms for weeks or months [2] and some for years after injury [3-17] despite a lack of evidence of brain abnormalities on MRI and CT scans. The core deficits of post-concussion syndrome overlap with those of Attention Deficit Disorder, Adjustment disorder and Mood Disorders. In addition, sufferers often report memory and socialisation problems, frequent headaches and personality changes.

Often despite several of these chronic symptoms, there is no evidence of brain abnormality from conventional structural neuroimaging tests, such as CT scans and MRIs. Consequently the person can be labelled a "hot head" with a "short fuse" or as having either a mood disorder or anger problem, or as having a personality or psychological disorder.

Symptoms have an organic basis.

The fact that these complaints seem to contradict the "negative" medical findings has often generated controversy as to whether post-concussion syndrome has an organic or psychological basis [4]. However, over the past 30 years evidence for an organic (brain based) aetiology (original cause) of post-concussion syndrome has accumulated through studies of cerebral blood flow, neuropsychological deficits, evoked potential recordings, PET, SPECT, MRI and quantitative EEG or QEEG [22-30]. The nature of concussive head injury has been extensively discussed and theoretical concepts have been formulated which are supported by QEEG evidence [31, 32].

The scientific literature indicates that Post-Concussion Syndrome can be identified with a high degree of specificity using QEEG neuroimaging and treated most effectively using Neurotherapy. The following link is a text to a peer reviewed paper on the use of QEEG and Neurotherapy for Post Concussion Syndrome by Dr Jacques Duff.

In the tests described next, scores are statistically compared to large databases of people with no mental health disorders or history of head injuries. The tests have been published and validated in peer reviewed scientific journals and are suitable for use in diagnostic systems. Together they can provide convergent evidence of an organic basis for a post-concussion syndrome, which requires specialised treatment with Neurotherapy [33] and appropriate nutrients to repair damaged tissues.

QEEG is the statistical evaluation of the electrical activity of the brain.  The QEEGs of hundreds of typically functioning people with no mental health issues or history of head injuries make up the normative database against which the QEEG of patients are compared. The differences are expressed as Z scores. QEEG is particularly suitable for the evaluation of post-concussion syndrome, as it is empirical, objective, non-intrusive and has been shown to be highly accurate in identifying and discriminating various neurophysiological patterns of brain dysfunction associated with Minor TBI and post-concussion syndrome [33-35].  A 2004 review of the scientific literature by Dr. Jacques Duff published in the journal of the EEG and Clinical Neuroscience Society confirms that QEEG is superior to structural Neuroimaging techniques in detecting brain dysfunction related to Minor TBI and post-concussion syndrome [33]which can occur with or without loss of consciousness. 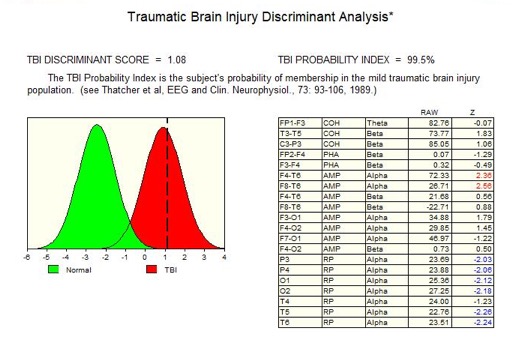 The Traumatic Brain Injury probability index provides a statistical probability that the person has suffered a mild traumatic brain injury [35]. The QEEGs of Hundreds of people with head injuries from Veteran Affairs Hospitals in the US were analysed and a discriminant function was developed that reliably separated those people with head injuries from those without. The index provides independent evidence to support the conclusion of an organic basis for symptoms of post-concussion syndrome [35]

There are in excess of 35,000 QEEG papers published since 1990, and there are no concerns in these papers about false negatives from QEEG Discriminant Functions. The only negatively critical paper about the clinical uses of QEEG was published in 1997 by Newer from the Academy of Neurology. The opinions expressed in that paper were refuted and discredited by the EEG and Clinical Neuroscience Society [36] as they were shown to be based solely on innuendo and vague unsupported statements, without a comprehensive review of the extensive literature. Since then, the QEEG Neuroguide system used in the diagnosis of Post-concussion Syndrome has been approved by the US Food and Drug Administration (FDA) on the basis of its efficacy.

IntegNeuro is a comprehensive Neuropsychological test battery developed by the Brain Resource Company. It is an easy to use, fully automated and computer administered series of 14 separate neuropsychological cognitive tests (tests of mental functioning) that reflect an individual’s cognitive performance profile. The test battery draws on the Brain Resource International Database, which consists of over 1000 normal individuals who have undergone a complete neurophysiological and neuropsychological battery of tests [37]. IntegNeuro is used to establish the degree of cognitive impairment due to stroke, head injuries and dementias, and to evaluate treatment progress.

Instructions for each subtest are administered through headphones, and the system's touchscreen is used for providing answers by the person being examined. There is a high degree of standardisation as there is no human judgement by the administering Psychologist, whose role is limited to monitoring the test.

Test of Variables of Attention (T.O.V.A)

The Test of Variables of Attention (TOVA) is a computer administered continuous performance task, which requires participants to press a specially designed micro switch whenever a "target" appears on the screen, and to refrain from pressing when a "non-target" appears. The scores are compared to an age appropriate database to produce standardised scores, which gives useful, objective information on four variables of attention described next.

The TOVA test is a highly sensitive, objective, and independent empirical measure to quantify the degree of impairment to the attention system and to measure the progress of treatment.

Medication may provide temporary relief from pain and counselling may help some persons understand the need to control their impulses and anger. However, there is no evidence in the literature that medication or cognitive rehabilitation can effectively restore cognitive deficits or concentration in post-concussion syndrome.

People with attention deficits and MTBI tend to have an excess of slow-wave brain electrical activity and abnormalities in brain connectivity. Neurotherapy (EEG biofeedback) uses operant conditioning of the EEG to give patients audio/visual rewards for producing more normal patterns of brain electrical activity.
Since the early 1970s, hundreds of studies have shown that, through Neurotherapy, patients can be taught to promote normal functioning in the brain by normalising dysfunctional brainwave patterns [33, 38-41]. A more recent improvement in Neurotherapy is in the use of QEEG to identify the specific brainwave patterns that need to be redressed [42-44].
Neurotherapy can also be used for improved concentration and enhancement of mental performance in persons without post-concussion syndrome. Look up the references web page on this site for a copy of a major review of the literature published in October 2004 in Clinical Electroencephalography, a peer reviewed medical journal.