It is important to note that the term ABA does not only apply to Discrete Trial Teaching, as is often implied in the popular media. ABA includes a variety of approaches, many of which are more naturalistic than DTT, and which demonstrate more generalisation of learned skills. One example is Pivotal Response Training (PRT), which is a naturalistic ABA intervention developed by Koegel, et al. (1989). The following are links to centers around the world involved in Pivotal Response Treatment 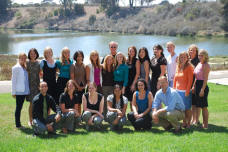 The Koegel Autism Research & Training Center is overseen by Drs. Robert and Lynn Koegel. The major goals of the center are increasing our understanding of autism spectrum disorders, the development and implementation of state-of-the-art pivotal response treatments, as well as the improvement of elementary and secondary education efforts for children with autism and other severe disabilities. The center's primary interests lie in research and training (both pre-service and in-service), focusing on family support and on the education of children with autism in community environments and classrooms with their typically developing peers. The center conducts research regarding the development of treatment delivery systems through families, schools, non-disabled peers, and others who provide support for children with autism in educational settings. The center is funded by a number of sources, including the state of California, federal research and training grants from the National Institute of Mental Health, the Department of Education, and through private donations.

The UCSD Autism Research Program is a federally-funded program involved in the experimental analysis and treatment of autism. Under the supervision of Dr. Laura Schreibman, this research laboratory has been in operation since 1984. Research objectives in our lab have included the improved understanding of language, social, and attention deficits in this population with the ultimate goal of developing effective treatment programs. Our main focus has been on the development, delivery, and evaluation of behaviorally-based interventions, typically within a parent-training model. We have been primarily involved in the development and evaluation of a naturalistic behavioral treatment, Pivotal Response Training (PRT). More recently, we have also become involved in translational research designed to transfer empirically-based treatments for autism into community and school settings, as well as research designed to identify methods of treatment individualization for children with autism.

This site is closely connected with the American Academy of Pediatrics Section on Developmental and Behavioral Pediatrics and has a multidisciplinary Professional Advisory Committee. The Commonwealth Fund of NYC has provided major funding. The project is located at All Children's Hospital in Saint Petersburg Florida.
The underlying observation which led to the development of the Pivotal Response intervention model is that there are some skills which are "pivotal” for an individual to function. Addressing a pivotal area of deficit results in gains by the child in areas that were not directly targeted by the initial intervention

An Interview with Robert Koegel

Q: How was the pivotal response treatment developed and how long have you and Lynn been researching it?

A: For over 3 decades now. We began researching the Natural Language Paradigm (NLP) in the 1970s, and in 1987 we published an article on the Natural Language Paradigm. The NLP became synonymous with motivation and motivation is pivotal in teaching children with autism to respond to multiple questions. A lot of people think this method is just about the use of motivation, but it also incorporates self-management and child initiations. 1988 was the first time the word pivotal was used to describe this method. It was referred to previously as the NLP. It is considered a behavior intervention with similarities to the Lovaas method/ABA.

Q: Why would you say PRT is more effective than other therapies?

A: First and foremost, children think of it as fun and learn skills by doing what they enjoy. They think of PRT as play rather than work and look forward to therapy. Children often detest "drill practices" used in other forms of autism therapy leading to therapy resistance, frustration, and tantrum throwing. This causes parents a great deal of stress. PRT is different. Parents love it because their children do and this leads to a decrease in their stress level. PRT is effective in all of the child’s environments and versatile enough to use at home, in clinical settings, in an inclusive classroom, and in the community, and parents can easily start folding PRT strategies into the child's established routine right away. As a result of all of these variables, families will start seeing positive results with PRT in a very short amount of time.

Q: How does PRT decrease stress for parents?

A: They do not have to worry about their child throwing tantrums and therefore they don't have to dread taking their child to therapy sessions. Children often hate having to perform drill practices involved with other autism treatments, they feel like they are being forced to do something they don't enjoy and they react to this by causing a scene to get out of treatment. The child will throw tantrums and resist therapy. In contrast, children enjoy PRT and look forward to therapy, no tantrums. Parents love PRT because their children do, they have less to worry about, and this leads to a decrease in their stress level.

Q: What exactly are "pivotal responses?"

A: We define pivotal areas as "areas that are central to wide areas of functioning such that improvements occur across a large number of behaviors." We have defined several areas as pivotal behaviors but focus on motivation and child self-initiations. The following example illustrates how this works: A child’s motivation to communicate about colors will increase if they are offered specific colored candies, to be given once they attempt to ask for the candies verbally. Once they understand the connection between using their own words and getting something they want, they will start to use words spontaneously to communicate their needs. Mastering this onepivotal behavior, motivating the child to understand the connection between their own efforts to communicate with the outcomes of their efforts, will have an enormous ripple effect on other skills. This sparks improvements in many other areas like speech and overall language development, cognitive development and social connection.

Q: How does this therapy differ from applied behavior analysis (ABA)?

PRT is a type of ABA; a data based improvement upon the traditional procedures. PRT uses specific motivational procedures that remedy a phenomenon called learned helplessness. It works because there is a motivator that makes the child want to work to accomplish the task at hand, the reward for accomplishing the task has a direct connection to it. Specific research based procedures such as the use of task variation, interspersal of maintenance trials, use of intrinsic reinforcers, use of child choice of stimuli, child initiations, and reinforcement of task attempts, are incorporated to make the intervention extremely powerful and efficient.

Q: In the autism field, how recognized is PRT, is it a treatment that is nationally recognized and used for treatment of autism?

A: PRT was named by the National Research Council of the National Academy of Sciences in 2001 as one of the top 10 state-of-the-art treatments for autism in the United States.

Q: Is PRT a costly treatment?

A: No it is not costly, because pivotal responses affect widespread areas of functioning by targeting certain behaviors, improvements occur in thousands of communication, behavior, and social skills. The cost of intervention is much greater when individual behaviors are treated one at a time.

Q: How quickly does PRT work? How long does it take to see results?

A: The speed of recovery with PRT is much faster than with other forms of therapy. A child who is highly motivated to communicate and is having fun doing it will learn much more rapidly than a child who is not motivated and not enjoying what they are learning. Like the example I gave about a child’s motivation to communicate about different colors . . . once they understand the connection between using their own words and getting something they want, they will start to use words spontaneously to communicate their needs. Mastering this one pivotal behavior has an enormous ripple effect on other skills, sparking improvements in many other areas. Therefore, because one modified behavior affects thousands, the treatment gets faster results.

Q: There seems to be considerable family involvement with the Pivotal Response Treatment. How have families responded, and how long it is taking them to become accustomed to using the treatment?

A: There is definitely a lot of family involvement with PRT. PRT becomes more of a lifestyle than just a form of treatment and is versatile enough to use at home, in clinical settings, in an inclusive classroom, and in the community. It works best if everyone involved in the child's life is "on board" with PRT, consistency with treatment is the key to seeing results in the child’s behavior. Parents often have to unlearn a lot of what they have been doing to help their child. A mother's natural instinct is to give her child what he wants so he stops throwing tantrums or listens, but with PRT, success involves patience and having the ability to let go of appeasing the child as well as sticking to consistently using PRT methods in every part of the child's life. As soon as this happens, changes occur and the parents will begin to see results that become more and more frequent as more behaviors become modified. Parents can easily start implementing PRT strategies into the child’s established routine right away. Since PRT is a lifestyle that families practice every day and not a treatment administered only in a therapist’s office, families will start seeing positive results in a very short amount of time.

Q: Could you please describe a child and what the child was like before and then after beginning therapy with PRT?

A: Lauri Bell, mother of a 6 year old autistic boy named Peter (name changed to protect his privacy) considers PRT "a true godsend." Her son was diagnosed at age 2-1/2 with a severe form of autism and was completely nonverbal and lost in his own world. After the diagnosis and several failed attempts with various therapies, Ms. Bell felt there was little hope for her son. After discovering PRT and two years of this therapy at the Koegel Autism Center, Lauri was told by her son's developmental pediatrician that he could no longer diagnose Peter, now age 4-1/2, as autistic. Today, his teachers have no idea that he was ever considered autistic.