Committed to addressing the causes of ADHD, Autism & Mood Disorders.

ASSESSMENT AND TREATMENT FOR ADHD AND ADULT ADHD IN MELBOURNE

Committed to addressing the causes of ADHD, Autism & Mood Disorders.

Usefulness of Stimulant Medication for ADHD

The use of stimulant medication to manage the symptoms of ADHD has become very popular over the last two decades. Psycho-stimulants (Ritalin, Dexamphetamine and Vyvance) are without doubt the most commonly used medical treatment for children with ADHD. The drug Methylphenidate (Ritalin) is responsible for a high percentage of the psycho-stimulant medication market for ADHD. Dosage of this medication varies from individual to individual, but is begun at the lowest recommended dose, and is usually given two or three times daily. Dosage is increased gradually to achieve a state of maximum symptom relief with minimal side effects. The effects of Methylphenidate can be observed 30 minutes after taking the tablet, and the peak efficiency is reached between one and three hours after ingestion. The efficacy wears off after four to six hours (Bender, 1997).

Psycho-stimulant medications have been reported to reduce the problematic hyperactive symptoms of ADHD in approximately 60% of children with ADHD. Research and clinical findings indicate that the ability to attend increases, social behaviours improve, and impulsivity decreases with use of psycho-stimulants (Barkley, 1990). Frequently parents report that not only behaviours improve significantly, but also relationships, between the child and the rest of the family, as well as with peers, improve markedly once the child is placed on medication (Bender, 1997). However on closer examination the picture is not as promising at it first appears.

Swanson and fifteen co-authors conducted a comprehensive examination of 341 reviews of the effects of stimulant medication on children with ADHD. Their review found that medication was ineffective for 25 to 40 percent of children with ADHD. A large proportion of those responding to Methylphenidate also showed improvements on a placebo. Amongst those that responded to stimulant medication, temporary management of over-activity, inattention and impulsivity can be expected, as well as temporary improvement in compliance. Hyperactivity and aggression may be reduced, and consequently, the amount of academic work completed may increase. However contrary to the hopes of parents and practitioners, there was no evidence of significant improvement in reading, athletic or game skills, proactive social skills, learning and achievement other then improved attending (Swanson, McBurnett, Wigal, Pfiffner, & et al., 1993). In other words, hyperactivity and attending may improve amongst those 60 to 75% of children that respond to psycho-stimulant medication, and for some that may be a huge improvement, but their learning ability and cognitive skills may not.

The review also found that parents should not expect improvements in long-term adjustment, such as improved academic achievement, nor should they expect a reduction in antisocial behaviours or misconduct (Swanson et al., 1993). This relatively poor outlook may be partly explained by findings that psycho-stimulants actually decrease responsiveness to positive rewards, while increasing responsiveness to punishment (Arnett, Fischer, & Newby, 1996).

Many practitioners and psychologists have believed that behavioural interventions and medication could be combined to provide a window of opportunity for children to learn adaptive behaviours (Barkley, 1990). The findings of Arnett and colleagues indicate that this is not the case and that the effect of methylphenidate may actually make it harder for children with ADHD to learn normal adaptive and appropriate behaviours (Barabasz & Barabasz, 1996).

Medication only works when it is in the system, and since methylphenidate clears the system in about 4 hours, up to three doses may be required each day. When medication is stopped, even if after extended periods, many of the undesirable behaviours often reappear. Clinical experience indicates that a common complaint of parents whose children take medication for ADHD is that while the child is less hyperactive and is more on task at school, the same child has difficulties getting started in doing homework, continues to experience difficulties following rules, and cannot understand why certain behaviours are inappropriate (Lubar, 1991). The frontal lobes control the executive functions of the brain, and behavioural problems arise because, as previously discussed, the cognitive functioning of ADHD children is impaired due to frontal lobe dysregulation affecting some cognitive functions. 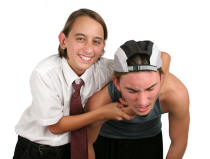 15-year follow-up of children on Medication

While medication may temporarily help some children, the side effects may be unacceptable to others, and the long term prognosis is still poor as there is no permanent remediation of the symptoms and the underlying neurological causes are still present. Weiss and Hechtman (1993) reported on a 15 year follow-up of children with ADHD, who had received treatment in that period. Their findings, which concur with those of others (Barkley, 1990; Hallowell & Ratey, 1994; Jordan, 1992; Nadeau, 1995), indicate that many of the problems encountered in childhood and adolescence continue to plague the adult with ADHD. Although hyperactivity is reduced in adolescence and adulthood, overall adults with ADHD achieve less, have more psychological problems and report more problems in social settings. These problems can in turn result in marital, employment and general functional difficulties (Bender, 1997; Nadeau, 1995; Weiss & Hechtman, 1993).

Children with ADHD respond to stimulant medication to varying degrees. While some respond satisfactorily, others experience undesirable side effects. A review of the literature reported by (Barkley, 1990) revealed that between 79% and 90% of children on these medications experienced undesirable side effects. Side effects reported in clinical studies are; loss of appetite, headaches, sleep problems, gastrointestinal disturbances, increased tic disorders, mood instability and growth reduction (Bender, 1997; Upfal, 1991). A small but significant number of children show negative physiological side effects that do not diminish or resolve over time despite cessation of the medication (Whalen & Henker, 1991). Psychostimulants are not appropriate for all children with ADHD. Those children with motor tics or Tourettes syndrome are generally prescribed alternative medications (Upfal, 1991).