Anxiety Disorder and Panic Attacks share common Biological and Psychological causes. There are many forms of anxiety. While some are related to stressful events others seem to occur for no apparent reason. However every effect has a cause. The causes vary from person to person. Genetic variations, nutrient deficiencies, dietary toxins all contribute to the causing imbalances in some brain chemicals (neurotransmitters). This is probably why antidepressants and anti-anxiety medications are effective in treating only around 40% of cases.

Recent research evidence implicates abnormal levels of some commensal (usually occurring) gut bacteria that can cause the release of high levels of trace amines and toxins, both of which can trigger abnormal neurotransmitter activity in the brain, leading to anxiety and panic attacks. The underlying causes can be teased out and treated, leading to more effective long-term outcome.

Anxiety disorders in children and adolescents

The DSM-V defines Separation Anxiety disorder as specific to children. This disorder is defined as anxiety regarding separation from home or family that is excessive or inappropriate for the child's age. In some children, separation anxiety takes the form of school avoidance. Children and adolescents can also be diagnosed with panic disorder, phobias, generalised anxiety disorder, and post-traumatic stress disorder. 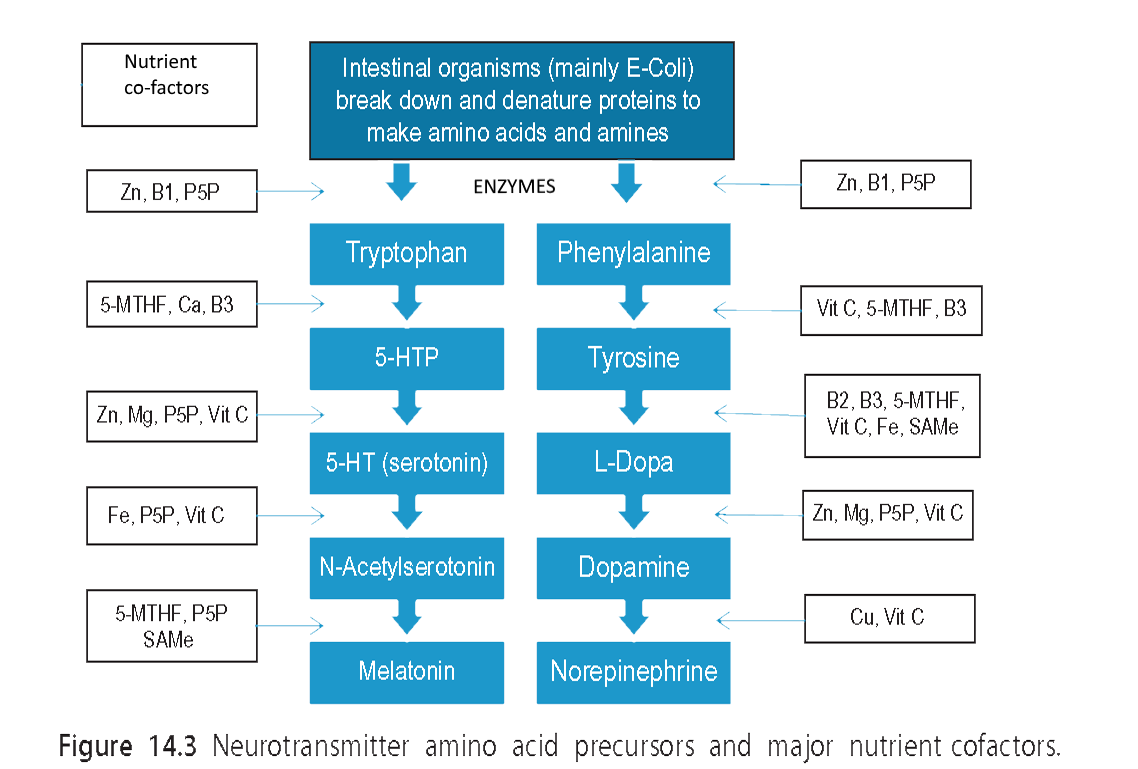 In the diagram, it can be seen that neurotransmitters (messenger chemicals in the brain)  are made by the interactions of enzymes (proteins made by genes) and nutrient cofactors.

What triggers anxiety and panic attacks?

Effectively it is the misinterpretations of physiological sensations as catastrophic that  triggers a massive release of adrenaline which exaggerates the sensations and further reinforces the idea that something is very wrong, which of course makes matters even worse. Anxiety is a normal emotional reaction to danger or to stressful situations perceived as threatening to a person's survival,  Anxiety disorder and panic attacks occur when that normal reaction is exaggerated or catastrophised. Although we generally think that stressful events trigger anxiety or panic attacks, sometimes either or both seem to occur for no obviously apparent reason. Frequently, there is a biological/genetic predisposition that makes some people more susceptible to anxiety and panic.

The Pharmaceutical model suggests that abnormalities in the balance of some brain chemicals (neurotransmitters) are responsible for anxiety. This theory is supported by evidence that antidepressant and anti-anxiety medications are sometimes useful in the treatment of anxiety for some patients. However these "chemical imbalances" are themselves effects of more fundamental causes that are not usually investigated or treated in psychiatric practice. Anti-depressant medications , such as Serotonin Selective Reuptake inhibitors (SSRIs) work for around 30% of people (those with the worse symptoms), while around 30% of people respond just as well to a placebo (harmless sugar pill which they think is medication).

Anyone can have anxiety and panic attacks, but they also tend to run in some families, probably due to shared genetic weaknesses, diet and poor nutrient uptake and abnormal overgrowth of some gut bacteria. Stressful life events can also trigger anxiety and in worse cases panic attacks. In some persons, there may be metabolic dysfunctions that predispose to these brain neurotransmitter imbalances. For example, lack of essential nutrients or intestinal dysbiosis (abnormal balance in the levels of gut bacteria). Recent evidence implicates abnormal levels of commensal (usually occurring) gut bacteria that can cause the release of high levels of trace amines and/or toxins into the blood stream. These amines and toxins can trigger neurotransmitter sites in the brain to malfunction causing feelings of excessive tiredness, depression, anxiety and/or panic attacks.

Scientists at the Psychiatric department of Mt Sinai Hospital in New York examined hundreds of studies in the scientific literature and found that up to 90% of people with Irritable Bowel Syndrome (IBS) had a psychiatric mood disorder, with depression and particularly anxiety being the most common. IBS, as a possible trigger for mood disorders, should be investigated and treated. At the Behavioural Neurotherapy Clinic, Dr. Duff and researchers from Victoria University examined the records of over 360 children and adolescents with anxiety disorder an compared these to others with no anxiety. Children with anxiety had an overgrowth of Streptococcus bacteria and an undergrowth of E-coli bacteria in their Faecal Microbiology Examination (FMA).

The physical symptoms that occur with panic attacks do not mean that there is a physical problem with the heart, chest, etc. The symptoms mainly occur because of an 'overdrive' of nervous impulses from the brain to various parts of the body during a panic attack due to fear. The real problem is the mistaken belief of imminent danger, and catastrophising these, creating the fear  – not the feelings of panic themselves – since panic is in fact an appropriate emotional reaction when you are convinced that you may be in danger. However, The idea that you are in danger is untrue, and when you understand this on a deeper level, you will master your panic attacks. However it would be wise to have someone at the clinic investigate the triggers.

What Are the sensations of a Panic Attack?

A panic attack is really nothing more than perfectly normal bodily sensations of anxiety coupled with an extreme misinterpretation of those sensations as dangerous or life threatening (catastrophising). Your belief that you are in danger results in increased anxiety, which then leads to more sensations and more catastrophic thoughts, creating a vicious cycle between bodily sensations, distorted thoughts, and anxiety, which can rather quickly result in a panic attack.

The bodily sensations are real enough, but it is their EXAGERATED INTERPRETATIONS that lead to an escalation of fearful anxiety and panic attack. Various symptoms occur during a panic attack:

During a panic attack you tend to over-breathe in a shallow manner and hyperventilate. If you over-breathe you 'blow out' too much carbon dioxide which changes the acidity in the blood. This can then cause more symptoms such as confusion and cramps, and make palpitations, dizziness, and pins and needles worse. This can make the attack seem even more frightening, and make you over-breathe even more, and so on. A panic attack usually lasts 5-10 minutes, but sometimes they come in 'waves' over a period of up to 2 hours.